Our First Siting of Land in Over 2 Days (South Shetlands)

The day started with a landing at Half Moon Bay, our first opportunity to step off the ship in 3 days. As we disembarked from the zodiacs we were greeted by a group of Gentoo penguins squawking and milling about. After snapping several dozen photos we strapped on our snowshoes and headed off across the snow ice, the first chance to stretch our beleaguered sea legs. The cloud strewn sky quickly turned on us as we trudged along, whipping up snow flurries and a bitter cold wind. This was a welcomed spat of inclement weather, allowing us to test our equipment and see what items we may have forgotten during the rushed packing job back home… the Gentoos and Weddel Seals didn’t seem to notice the change in weather. 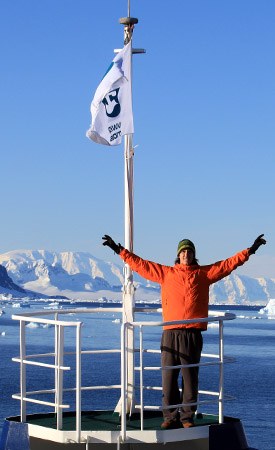 From Half Moon Bay we continued down through the South Shetland Islands to Port Foster, nestled in a gigantic caldera in Deception Island. As we sailed into the caldera it was hard to fathom that this was an active volcano and had destroyed the Chilean stations Pedro Aguirre Cerda and Gutierrez Vargas as recently as 1969. After weighing anchor we re-boarded the zodiacs and headed ashore to begin our first mountaineering excursion.

Hiking passed the remnants of old whaling and research stations, we came to a small valley that took us up along the caldera’s ridge line, culminating atop a peak with expansive views of the South Shetlands down to the Antarctic Peninsula. From there we left the expansive panorama behind, hurrying back down to the awaiting zodiacs and our departure for the Antarctic Peninsula Proper. The atmosphere back on board was lively. We were now in sheltered waters, seasickness had abated for nearly all on board, and the journey across the Drake Passage was behind us (until the return journey of course). As people mingled about the observation deck toasting to the adventures that lay ahead, I made an early exit, looking for a full night’s sleep in anticipation of the day to come.

I awoke the next morning with the sun streaming through my cabin’s porthole window. Butterflies fluttered about in my stomach like a child awaiting Christmas. What would the landscape display when I walked through the double doors to the window walled lounge? I threw on my jacket and slippers and headed up top. It was about 5:30 a.m. and what lay in front of me took my breath away.

The skies were crystal clear, with glassy iceberg laden waters below. The bay was the deepest blue I’d ever seen, accented by massive glaciers and pristine, snow-covered mountains that leapt up around me on all sides. We had sailed through the night and now found ourselves in Paradise Bay, an apt name to be sure. This was truly the most spectacular scenery I’d ever seen in my life, and to have this time while others were still tucked snugly in their bunks was an exhilarating gift. I grabbed a cup of coffee from the automatic espresso machine (a piece of equipment on board almost as important as the lifeboats) and headed to the bow to take in my surroundings.

The peace that came over me as I reflected on my geographic position was all consuming, as is the appreciation for whatever facilitated this adventure. I had come to Antarctica in search of the extreme landscapes described in books and by fellow travelers. What I found dwarfed any expectations. I had arrived and Antarctica performed!