My first day in Antarctica

Early in the morning I found myself at my locker in the mudroom. It was quiet. I was the first one to get ready and I was alone. As I began putting on my gear I could feel my heart beating with excitement, and to be honest, I was a bit nervous. After years of hearing about this continent, researching and reading exploration books, traveling to the bottom of the world, and all the anticipation that led up to this day, I was just a few moments away from standing on Antarctica for the first time. 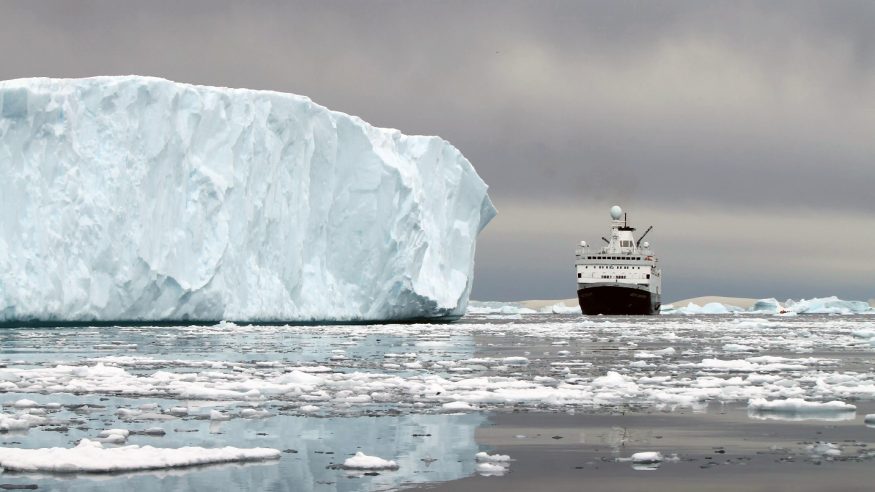 Cruising through the ice

Our ship sat idle in a calm bay surrounded by icebergs and glaciers. It was a beautiful, sunny day in Antarctica. The temperature outside was 45 degrees, and there was not a cloud in the sky. I checked again to be sure I had brought my sunscreen. At last, two guides and 10 enthusiastic hikers climbed into a zodiac boat and cruised to the shore of Brown’s Bluff. When we arrived on shore, hundreds of Adelie penguins were there to greet us. Our guides said it was not common for the penguins to be in this location – thus far, then, we’d had great luck with both weather and wildlife. We all took a moment to look around. No one said a word, but everyone had huge smiles on their faces. We’d made it to Antarctica! 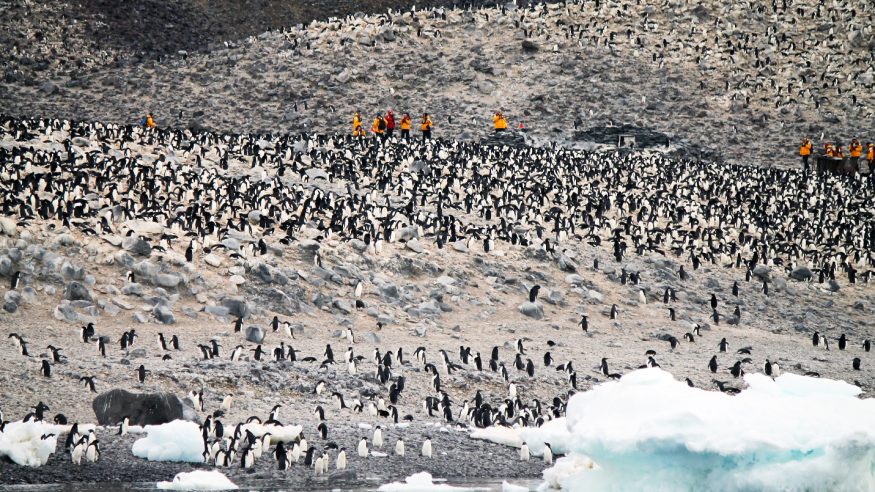 After our guides reviewed some safety items, we strapped metal crampons to our boots and set off, hiking up the side of a glacier. The sun shone off the bay, icebergs and glaciers, creating breathtaking views. The further we traveled up the glacier, the more treacherous footing became. Our guide was leading the way and noticed we were coming to a point on the glacier with crevasses. The crevasses can be difficult to spot, as they get covered with what is called a snow bridge. Snow bridges are formed over time due to falling snow and high winds, creating a deceptive cover over a crevasse. In the exploration books I have read on Antarctica, there are constant references to snow bridges, crevasses, and explorers falling through snow bridges into crevasses. What happened next would depend on the size of the crevasse, as they can be one foot wide or several hundred feet wide. We were glad to have a knowledgeable guide leading us! 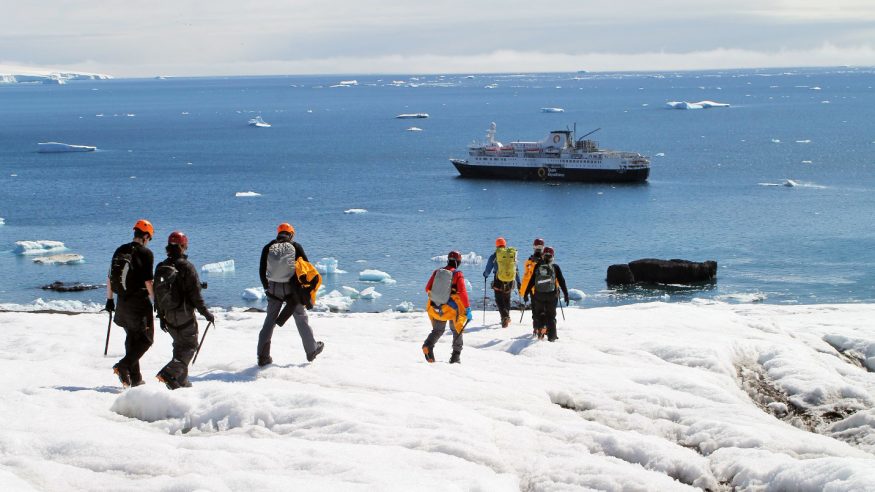 Trekking across the ice

As we hiked, our lead guide looked carefully for crevasses. In one spot, he had us take a big step over a crevasse. A few other members of the group went before me. When it was my turn, I took a long stride – but not long enough. My leg sank right into the crevasse up to my waist. Luckily only one leg went through! I was surprised more than anything else. I quickly worked myself out, with the help of the guide. Once I had pulled myself out and realized I was safe, I couldn’t help but find the experience a little thrilling: for a split second I felt like an explorer from the adventure books I’d read, breaking through the ice into a crevasse. Our guide checked me over to be sure I was okay, then we continued hiking. When we returned to shore, we took some time to soak up the atmosphere of being on a beach in Antarctica. By this time our parkas had come off due to the nice weather. On the beach, the penguins seemed happy to see us.

Back on the ship, lunch was interrupted by an announcement over the intercom from the expedition leader: ahead of the boat was a pod of orcas. Everyone rushed out of the dining room to the decks to see what was going on. In front of the boat, a pod of approximately 25 orcas was swimming. For me, it was a bit emotional to see these magnificent animals in their natural habitat. The whales were coming to the surface and I could see males, females and their calves. The experience only lasted for a minute or two, but it was a highlight of my trip. 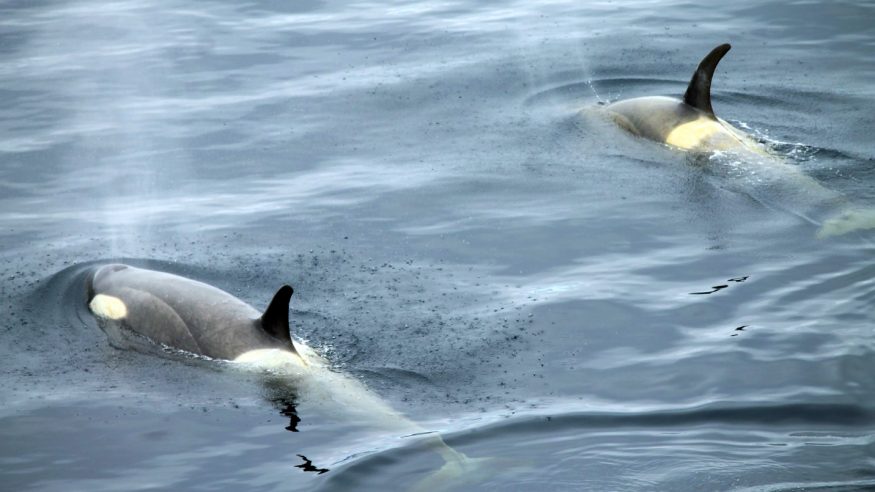 Orcas swimming by the ship

In the afternoon, we headed to a penguin colony on Paulet Island. I traveled to Antarctica in late mid-December, around the southern hemisphere’s summer solstice, December 21st. Penguin chicks are expected or estimated to hatch in January. When we arrive on Paulet Island, we were lucky again: the Adelie penguin chicks had just hatched. We would find out later that the Gentoo and Chinstrap penguins had not yet hatched. Seeing these Adelie chicks was unexpected, and an amazing opportunity. The island was covered with Adelie penguins. Including the chicks, this penguin rookery was host to over four hundred thousand penguins. We were able to see all sorts of behaviors, such as mating, fighting, and feeding chicks. Once we were on the island we hiked carefully among the penguins. There are strict rules about how close you can get to the penguins, but the penguins themselves often don’t follow them! The curious ones will walk right up to you. Several times, a penguin came within a couple feet of me. As I walked around, I noticed how loud it was – with so many penguins all communicating at once, it was like a vibrant metropolis. 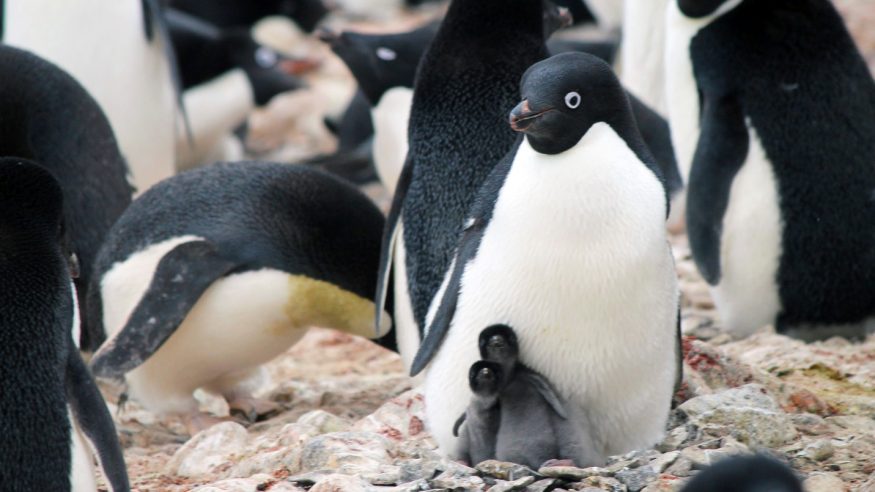 After hiking around Paulet Island, we climbed back into the zodiac boats and cruised around the bays, inlets and icebergs. We spotted crabeater seals, Weddell seals, leopard seals, minke whales, and humpback whales. At times, from the zodiac we were just a few feet away from a seal napping on a floating sheet of ice. It started to snow as we cruised along, the gray sky mixing with the colors of the landscape and the drifting snow to create a spectacular backdrop for photos. 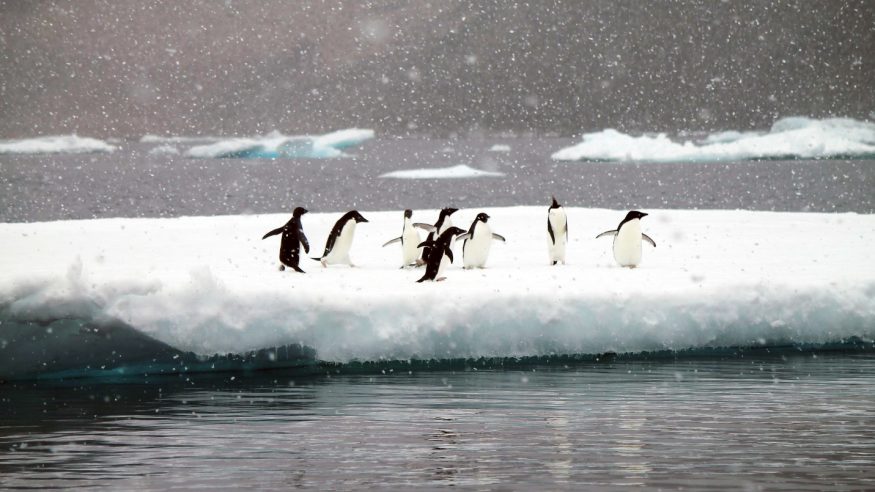 Penguins in the falling snow

All this happened during my first day in Antarctica, and it was everything I’d been dreaming of for so long. Our guides were over the moon at how well our first day went. The landscapes were breathtaking, the wildlife was abundant, and the weather was great. Antarctica had already exceeded my expectations.

In Antarctica, you are essentially a fly on the wall, observing this amazingly abundant ecosystem. I went to Antarctica expecting to see lots of icebergs, glaciers, penguins, seals, whales and birds. What I did not expect was the sheer size of the icebergs and glaciers, which are so big it is difficult to image. I did not expect to see literally hundreds of thousands of penguins. I did not expect to see pods of a variety of whales. If you love to see active wildlife and incredible scenery on your travels, than Antarctica should definitely be on your list.