The Antarctica cruise season runs from October until March, which are the late spring and summer months of the southern hemisphere. Deciding when to go, within that time period, will depend on what you hope to get out of the journey. Each of these factors is of course subject to change, but here is a rough idea:

October-November: In these months, the fierce Antarctic winter has recently given way to spring. It’s a beautiful time for landscapes: the vistas and landing sites will have more pristine snow and undisturbed ice. That being said, access to some areas may be more limited, if the ice hasn’t yet broken up sufficiently to reach them. There may be less wildlife activity in general at this time of year, although it can be a good time to see penguins mating. This time of year typically has much lower temperatures than later in the season.

December-January: This is the warmest time of year in the region, averaging just above freezing on the Antarctic Peninsula, and the area gets up to 20 hours of sunlight per day during these months. This is a good time to see plentiful wildlife, including recently-hatched penguin chicks.

February-March: This is a good time to see whales, though other wildlife may start to become more scarce. Temperatures begin to drop again as the region edges toward winter. There tend to be fewer cruises offered at this time, which may mean fewer other travelers at the landing sites, and you may be able to travel further south as more ice has melted by this time. Landings at this time of year will likely have less pristine snow and be a bit more muddy or rocky.

As seen above, the best time to visit Antarctica is in the austral summer, between October and March, when temperatures are comparatively warmer and there are longer daylight hours. The temperature on the Antarctic Peninsula during the austral summer is about 32° F, although wind chill can make it seem colder. Antarctica’s strong winds, called katabatics, are formed by cold, dense air flowing out from the polar plateau. It is best to be prepared by dressing in layers, with a shell or Gore-Tex overlayer, waterproof pants, and a wind-protecting parka.

Earlier in the season, the ice may still be quite solid, which can limit access to some visitor sites. December and January tend to have the warmest temperatures, and the peninsula gets up to 20 hours of sunlight per day during these months. Later in the season, it is usually possible to travel further south, as more ice has broken up, but temperatures will be colder as the region moves toward austral winter. The Antarctic continent is very dry, only averaging about eight inches of precipitation per year. 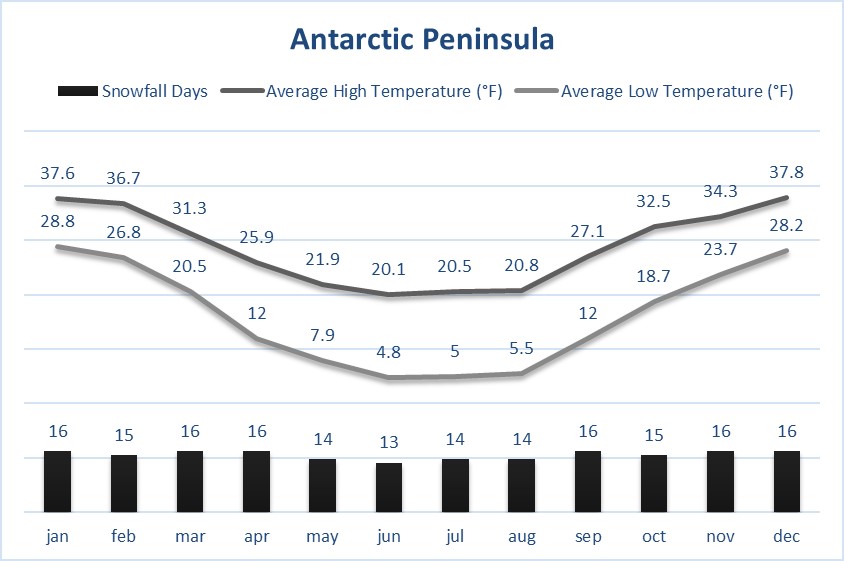